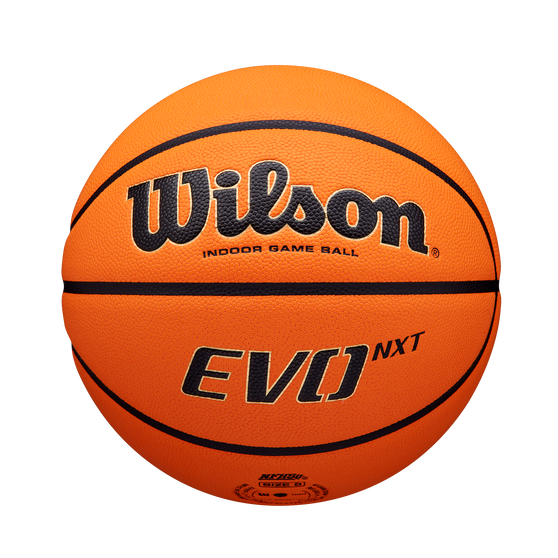 The NCAA Evo NXT game basketball is what college shooters have been dreaming about, lighting up a new path beyond the arc with optimally balanced internal construction, built for long range shooters who live in 3-point territory. The Official Basketball of NCAA March Madness raises the standards for performance and innovation on the court, making the most thrilling plays of the year in the hands of the game's top student athletes.
Externally its surface uses a Micro Touch Cover for unparalleled grip and feel allowing for an effortless shooters touch upon release. It uses revolutionary Extended Range Tech, the weight of the ball is redistributed with an advanced internal construction, making the ball easier to shoot from long range.
The collegiate game deserves the NCAA Evo NXT game basketball, made for every second of play from buzzer beaters to Cinderella stories and comebacks, a basketball that prepares you for where the game is headed.

The NCAA Game Ball sets the standards for performance and innovation on the court.  Patented fe…

The right mix of pageantry and performance. The NCAA Composite features the official logo and classi…

What everyone else looked at...

There is a reason that the Evolution is the #1 Selling High School basketball in the country.  …

The Wilson® Evolution Game Basketball is engineered for elite performance. A great grip is ensur…